Several weeks ago, Diana, a member of the Gardening With Natives group, submitted this request to the members:  “Do any of you know why people might choose NOT to garden with native plants?”

This article in the Granada Native Garden Newsletter is a compilation of the opinions that were submitted by the GWN group.  Because of the volume of responses, I have divided this article into two parts:   Part 1 presents opinions, reasons and excuses for why people do NOT grow native plants.  Part 2 will concentrate on what both we and the industry can do in order to promote greater interest in native California plants.

The opinions stated have been edited by me, sometimes extensively, to fit the objective of this article.  While I generally agree with the statements below, the words, sentiments and opinions are primarily those of the GWN contributors.

PART 1:  Why People Do NOT Grow Native Plants

“People choose plants based on what they think will bring them the most joy and satisfaction.  Many people want to create something in their yards which gives them joy, but which also requires very little maintenance to stay beautiful.  There are so many native plants that grow reliably and are never bothered by pests, but people don’t know about them yet.”

“Many people don’t know much about plants, and they make impulse purchases based on what’s in bloom.  Many natives aren’t in bloom at the best time for amateurs to plant them, and people browsing in a nursery stick with what looks good to them.”

“I do not understand why people think California native plants are not pretty.  I guess they have never seen Epilobium blooming, or manzanitas or Ceanothus or madrone or oaks.  But      I also want to add a good word for Baccharis pilularis.  I’ve heard a lot how good it is for wildlife, so I planted it.  Nobody ever mentioned how gorgeous it is when it is in bloom – so dainty and elegant.”

“As long as people can afford the water, they will have less inclination to plant natives which need less of it.”

“We still have abundant water in California, and we have many more people who are new to this environment and realize that they can provide the climate for any exotic they want.”

“People grow whatever they are used to, whatever grew where they come from.  But the California industry mostly ignores California native plants as being unprofitable.”

“When I first came to California, there were a lot of plants I didn’t recognize.  It took a long period of adjustment before I began to appreciate their beauty.”

“People are accustomed to buying what they see in nurseries and in other peoples’ yards.”

“Natives require a different watering regimen, and many household systems are not set up for that.  People aren’t necessarily familiar with those regimens, nor how to set them up.  Many natives require less water and care, but many others require some attention in order to keep them looking good.  Most commercial gardeners lack experience and knowledge of native plants, so they just do what they’ve always done.”

People Don’t Plant What They Consider Unattractive
“For some people, the word ‘native’ may connote something unattractive.  If it implies an untended, weed-covered lot – which in reality is probably a place filled with non-native invaders gone rampant – they are not likely to give true native landscaping a second thought.”

“I’ve known people who, knowing my interest in native plants, told me about ‘native’ front yards that turned out to be untended weed patches.  If people have unfavorable precon- ceptions about natives, you have to start out by showing them the plants without letting them know that they are natives.”

“People may consider native plants to be invasive weeds.  So the word ‘native’  might make people think of natives as invasive, that is, undesirable, plants.”

“Many natives look good for a short period, but they are not in bloom for very long and may look ratty at other times.  Thus, they have less appeal, and they might require more work to keep them managed and attractive, and many people are unwilling to invest the time and energy for this.”

“Most nurserymen and gardeners in California know little about the native ‘brush’ – the stuff that needs to be cleared out in order to plant a ‘proper’ garden.  So the industry has no profit motive to develop California native plants.  Besides, California has been developed in times when transportation and water issues were not as critical as they are now, so it has been more profitable to import and sell plants from other locales.”

“When the Europeans sailed up the California coast during the dormant season of California plants, they viewed the landscape as brown and ugly.  This impression was not what they were familiar with from their homelands.”

“Some people think native plants look ratty and brown; but they think eucalyptus is native.” 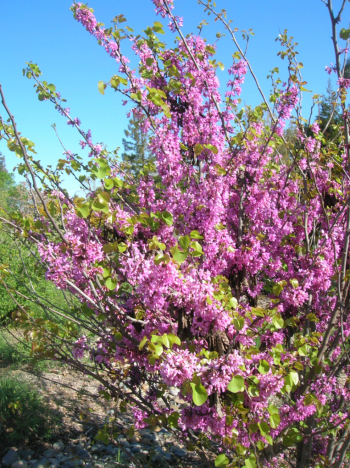 “Some years ago I took a class in which a landscape architect who had done some work with CalTrans said that CalTrans didn’t want to plant the natives he specified because, they said, “natives don’t grow well”.  It turned out that the landscape crews over- watered and over-pruned, so it was basically a training issue.”

“I get the impression that ‘different’ is ‘bad’.  I have a mostly native yard — no lawn, lots of mulch, in a $1,000,000 neighborhood.  I have never got any com- pliments from my neighbors – even when my gorgeous Ceanothus are blooming – only complaints about bees that are going to sting everyone!  Then there are complaints about too many plants.  And there is the garbage and cigarette butts tossed on my yard.  But my hummingbirds, bees, birds, lizards and butterflies are happy – so I am too!”

People Buy What the Stores Sell
“Nurseries stock what they expect people to buy.  The nursery trade has long specialized in plants, especially hybrids and species from other parts of the world, that look good for a reasonably long part of the year or are particularly attractive, and are easy to maintain.  And that is what people look for, regardless of whether they are native or not.  I have spoken to nursery people who say that the cost of bring a hybrid or cultivar to market is too high for the small retail sales that they currently bring.”

“Many independent nurseries accept special orders, but you have to know what you want.”

“Many Californian native plants are not in bloom when the customer is shopping.  It helps if nurseries have placards with photos and other information to show customers what the plants will eventually look like.”

“The nursery industry survives because it is able to sell plants that have colorful big flowers that are developed to survive in highly disturbed soils where most of the population lives.”

Our Mediterranean Climate Is To Blame!
“Something that confuses folks is the Mediterranean climate.  We have cool wet winters and long dry summers — there are only 5 places on earth that are like that.  Anyone migrating here has no idea of which plants are adapted to that climate.  And they water like mad in summer when our plants are asleep, and they die from too much water.”

“Native plants in California depend largely on an underground source of water, or a dormant seed bank in the ground.  Some depend on fire to stimulate their growth.  If this seasonal pattern is unfamiliar to people who like a manicured look, they might not appreciate native California plants.”

“People who have relocated to California from other parts of the country often say that they miss the change of seasons.  They don’t notice that there is a noticeable change in the seasons here, but it just isn’t what they are accustomed to.  For example, it is normal for some native plants to drop their leaves and go dormant in the middle of Summer, but this might not what people expect.”

“Our Mediterranean climate opens many doors.  Warm, dry weather and the shade alongside a house let you plant camellias, fuchsia, azalea, fuchsias with larger flowers, longer lasting flowers, with a larger color range than any native equi- valent.  In sunny parts of the yard, you can plant a rose garden and enjoy beautiful roses from April through December.  Most of the exotics don’t even need protection from the cold during the winter.   Economics favors this trend to introduce exotics.”

“California native plants evolved to thrive on wet winters, when they are in full bloom, but have adapted survival techniques during the dry season by losing their leaves and aestivate during the late spring and dry summers.  On the other hand, the nursery industry has had many years to develop plants that look good all year long, especially during the summer, and so appeal to the public.  Also, many California natives that are on the market have come from other regions in California where the climate is cooler or wetter, but they might not do well in the dryer regions.  Many natives can be kept looking nice most of the year, but they need a carefully planned watering regime, and this takes time and know-how to establish.”

Gardening Is Not Part of Everyone’s Culture
“Gardening with natives requires either time investigating and learning about native plants, or paying someone who knows to redo the yard.  Many people don’t garden.  They don’t want to, don’t know how, don’t have the time or don’t want to spend the time.  They might buy a few pretty flowering plants that catch their eye, and stick them in the ground, and they look good for a few weeks but later the plants die from being misplaced or neglected.  They want something easy that a hired person can clean up once a week and keep green or doesn’t require any care at all.   Most people in my neighborhood can’t afford gardeners.”

“A lot of people don’t like to garden at all.  They move into a place and just retain the existing landscape.  To begin with, it takes vision to even think of something else being there.  Then it takes the initiative to actually change it.  So often, when people do decide to finally change and they update their yards, they just duplicate what was already there.  Aesthetically, people sometimes want lush green yards.  I personally like lots of edibles.“

“People work all day, and if they do have time to garden, they will use whatever they happen to find at Home Depot or OSH, things that are well labeled and look pretty.   Native plants need to be easier for working people to choose and buy!  If you have to go to too much trouble to find good natives, it’s not good for the movement as a whole. 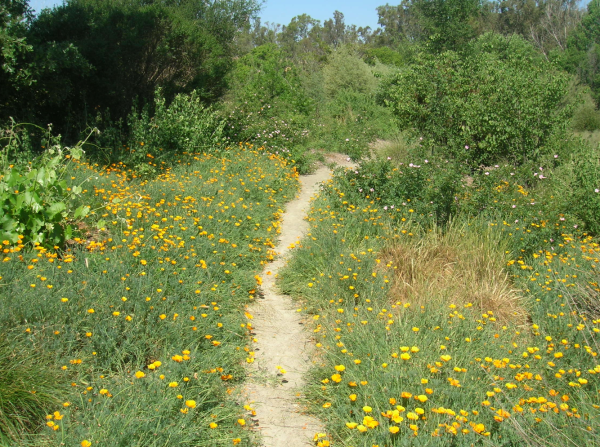 Part 2 of this article addresses what both we and the industry can do in order to promote a greater interest in native California plants.  It will be published within the next few days.

4 thoughts on “Why Do People NOT Grow Native Plants? – Part 1”