Bush Poppy Is a Fire Follower!

At the end of May, we were working on an article about the bush poppy (Dendromecon rigida) which resides at the north end of the Granada Native Garden.  The bush poppy is interesting for a couple of different reasons.  For one thing, it has bright yellow flowers that remain on the bush for several months, well into summer, and they contrast nicely with the grayish-green foliage.                       But also, the seeds that fall from the mature flowers are difficult to germinate into new plants.  They need to be brushed by fire in order to stimulate the germination process, and so the bush poppy is among the first to appear after a fire.  That’s why the bush poppy is called a “fire follower”; but there are many other plants that also require fire in order to prompt their appearance.  (Click on a photo in order to enlarge it.) 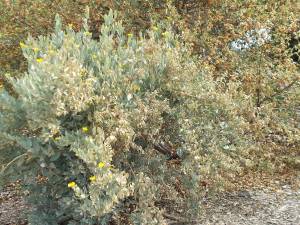 Bush poppy after the fire

Coincidentally, on June 1,  the GNG was impacted by the fire which was started along the west side of the Arroyo Mocho.  The bush poppy was toasted on one side, not severely, but it will be interesting to see if any seedlings pop up (oops, excuse the pun!) when/if the winter rains occur.  (For a summary of the fire’s effects on the Garden, see the article “Fire! at the Granada Native Garden” posted in the June, 2014 Newsletter.) 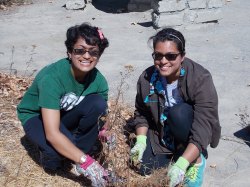 immense help in the effort of clearing the debris have been Meenakshi and Malvika, both Granada High School students, who have spent several hours toting burned debris to the brush pile!  It’s a dirty job, but somebody has to do it, and Malvika and Meenakshi, along with other GNG worker bees, have stepped up to do it!

municipal storm sewer system.  In fact, over the past year, GNG worker bee Dave has collected 1,253 gallons of trash left behind by careless people or carried by the wind into the arroyo and its environs.  Believe it or not, this amounts to 1,942 pounds, almost one ton, of trash and debris!                            The Adopt-A-Creek Spot program is a great way to help improve our local environment and community.  Join us, or learn more at  http://www.TriValleyCreeks.org.