Fiddleneck (Amsinckia menziesii), also called “rancher’s fireweed”, is not one of the California native plants that you expect to find in a native plant nursery.  Yet, it is one of the very first wildflowers that appear in the Spring, and it may appear in great abundance even in mid-winter, like currently at the south end of the Granada Native Garden.                                 The fiddleneck is so named because the flower stem, bearing many small flowers, curls over at the top like the head of a fiddle.  It is in the same botanical family as borage (Boraginaceae), an often-cultivated garden plant.  (Note:  “Fiddleneck” is a flowering plant; fiddleheads are the young shoots of some ferns, which are similarly shaped but are not flowering plants.) 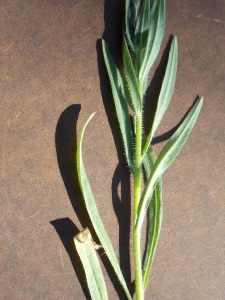 The seeds and foliage are poisonous to livestock when ingested in quantity, because they contain toxic alkaloids (intermedine and lycopsamine) and high concentrations of nitrates.  Poisonings occur when livestock consume contaminated grain or feed.

Fiddleneck seeds are the favorite food of Lawrence’s goldfinch (Carduelis lawrencei), and are of special value to honey bees which in turn pollinate many of the crops we depend on for our food.  The leaves are used as food by the larvae of the popular painted lady butterfly (Vanessa cardui).                                   But aside from 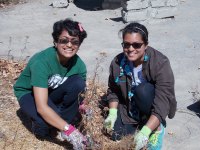 Two Granada High School students and Granada Native Garden Volunteer Worker Bees, Meenakshi and Malvika, recently won the App Challenge sponsored by Congressman Eric Swalwell.  After “coding like crazy” all weekend, the sisters created an app that could help people (especially stressed-out high school and college students!) deal with negative emotions and convert them into positive messages.  Meenakshi reports that they are looking forward to getting the app on the App Store soon.

Stumpy’s Tree Service recently delivered a large load of mulch to the Granada Native Garden, to be used in dressing parts of the Garden, suppressing weed growth, and helping to mitigate a mud problem at the Garden entrance.  Stumpy’s joins the Alden Lane Nursery in helping the GNG create a native plant garden that Livermore can be proud of, and lead to an increased appreciation of native plants in the California environ- ment and home landscapes.

5 thoughts on “Fiddleneck – What Good Is It?”