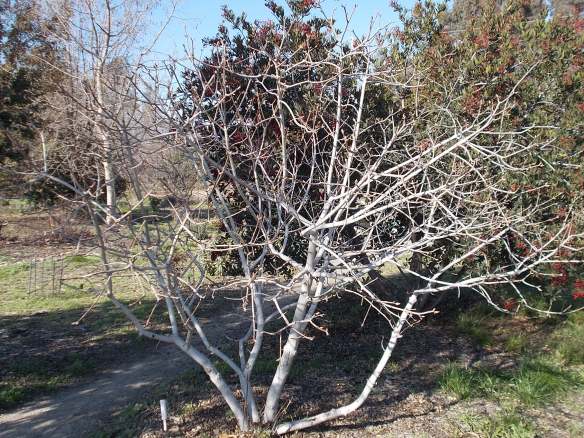 Buckeye with “candles” in April 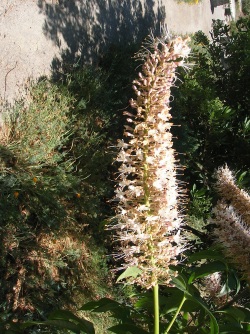 Shortly after the buckeye begins leafing out in late winter or early spring, the future blossoms, resembling candles, form in abundance at the tips of the new growth.  In a matter of a few weeks, the candles burst into clusters (panicles) of sweet-scented, white to pale pink flowers.  Each panicle consists of numerous individual blossoms, but only one or two of them will eventually mature into a buckeye fruit, which contains the seed of a potential new tree.  (You may click on a photo to enlarge it and get a closer view.)

The Buckeye in the Home Garden – Pluses and Minuses                                                       Not everyone appreciates the striking silvery architecture of the dormant California buckeye (Aesculus californica), if they expect everything in their garden to be lush and verdant in the summer.  Its size (15-30 or more feet), shape (sometimes single-trunked, sometimes multi-trunked) and summer-deciduous habit (it loses its leaves in the summer) does require careful placement in a home garden (altho a source of summer water will keep the leaves green).  One author describes its form as “best in sun, where trees develop into a living sculpture of multiple or low-branching trunks, symmetrically out- stretched branches, and a delicate tracery of small branchlets.”   The short-lived display of blossoms are sure to attract attention, followed by the unusual drooping fruits containing the mahogany-colored seeds.

The seeds are about the size of a golf ball and are sure to be noticed when they fall to the ground in the autumn.  But because they are poisonous to mammals, they could endanger a dog who might be tempted to chew on one.  Native bees and butterflies, who have co-evolved with the buckeye over the centuries, are readily attracted to the buckeye blossoms and are not harmed by the toxin in the pollen and nectar.  However, it is of concern to some gardeners that the blossoms are toxic to our non-native honeybees, who have not developed resistance to the toxin. 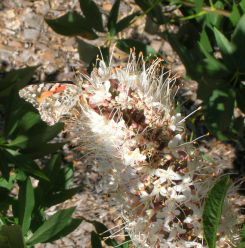 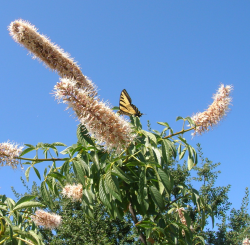 But it might be fun and instructive for a child to plant one or more of the seeds and watch it grow.  The tree is a fast grower – it might achieve as much as 1-2 feet in a year.  Plant the brown seed half-buried in a pot of damp but well-drained soil, or directly in the ground, with the light spot on the seed facing downward so that the spot remains covered with soil – the root will sprout from this area.  Make sure the soil stays damp, but not soggy.  The chances are excellent that it will sprout when the weather starts to warm.  It needs a little water during the first year or two of growth.  Like so many native California plants adapted to drought conditions, it develops a long tap root to reach water deep-down.  After that first year or two, it should need no summer water at all, but it will characteristically lose its leaves in the summer unless it is given a little water once a month or so.

The GNG Is a Destination!                          Rex and Jenny Mananquil chose the Granada Native Garden as the site of their annual family photo, with almost-2-year old Zara as the centerpiece (in addition to the Garden itself).  The photo was taken by local photographer Dylan Douglas, but Rex himself is a professional photographer whose work is well known both in the Bay Area and in southern California.  Google “photography by Rex” to get to his website. 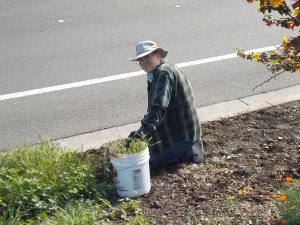 Dean has joined the GNG Worker Bees and is now sharing his wealth of gardening experience with the GNG.  Currently he has offered to tackle the Murrieta Blvd. approach to the Garden, which was becoming more unsightly with each passing day.  It’s a challenging task!

2 thoughts on “The Water-Wise Buckeye”