We weren’t planning on posting an article so soon after the previous one (on “Precocious Poppies”, archived in February, 2014), but a visit to the Granada Native Garden impressed us so much with the different colors that are currently on display made it imperative that we share them with our Followers.  So this post is mostly an album of photos (with very little added commentary) of the many colors that are on display as April begins.                          The field of poppies (Eschscholzia californica) and a couple of purple companion lupines (Lupinus sp.) are, of course, the first to meet the eye when you arrive.  But a casual stroll around the Garden will reveal many more details that are more or less obvious, but equally striking.  Some of these plants have already been written up in detail in earlier posts (see the Index to learn which ones), and others will be added in the coming months (or years).  Enjoy!  And visit the Granada Native Garden before they transition to the next seasonal generation!

Bush poppy, in front. Flannel bush in the rear.

At the north end of the GNG, along the chaparral birm, the bush poppy (Dendromecon rigida, above, in front) and one of many flannel bushes (Fremontodendron sp., behind the bush poppy) are in full bloom.  You can’t miss them!  (Hint:  To enlarge a photo, just click on it.)

Near the same part of the Garden, the snowdrop (Styrax officinalis) has cute little white pixie-like blossoms that last only for a couple of weeks before they fall off like a light dusting of snow on the ground.  Catch them before it’s too late!  More attractive but only from a distance, the mauve flowers of the western redbud (Cercis occidentalis) might seem to conflict with last year’s brown seed pods, but,  hey!  brown is a color too! 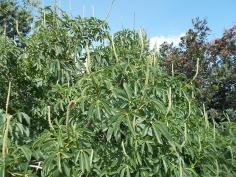 There are more than 50 shades of green.  Explore the Garden and see how many you can find.  Here are three of them.  (Sorry, but we’re not sure which of the native bunch-grasses this one is! ) 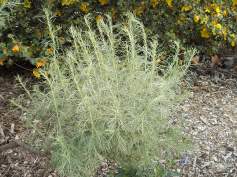 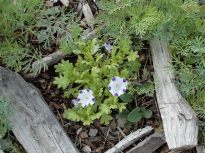 This spring three new flowers appeared at the Granada Native Garden.  They weren’t planted or seeded by anyone other than, perhaps, birds or the wind, and you have to know where to look.  But they are welcome arrivals, and hopefully they will re-seed themselves so we will see them again next year, and become permanent wildflowers at the Garden.  Here they are; again, click on each photo in order to enlarge it and get a better look. 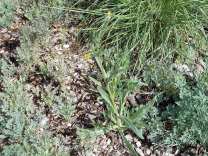 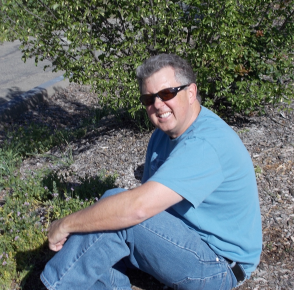