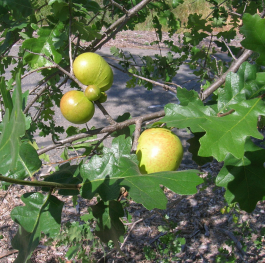 New galls in the spring

Oak apples in the fall

Galls are common features on other plants as well, such as poplar and cottonwood, but they are more readily noticed on the valley oak.  The California gall wasp (Andricus quercuscalifornicus) inserts fertilized or unfertilized eggs under the bark of oak twigs.  Larvae which develop from the eggs are thought to secrete chemicals that cause the oak tree to respond defensively by growing plant tissue around the infection site, eventually forming the round growth, the oak “apple”.  The galls are green in the spring, and turn to brown in the summer and fall.  Each gall may contain one or more wasp larvae.  The larvae mature and nourish themselves with the nutritive tissue of the galls, and eventually tunnel their way out of the gall as adults.  In the meantime, the styrofoam-like interior of the gall functions as a cozy habitat for the developing wasps during the hot summer months.                     Eventually, the galls fall off, and the tree doesn’t appear to be harmed in any way.

Oak apples on a tree in winter 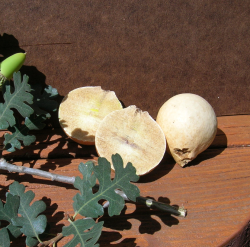 Inside an oak apple gall

The “Elder Statesman” of California’s Oaks
The California white oak, or valley oak, made a big impression on the Europeans who first explored this part of the country.  Some sites contained hundreds or thousands of these huge trees, which commonly rose to 40-100 feet in height and 9 feet in diameter.

A different wasp species, Andricus kingi, produces galls of a different and very interesting sort.  The red cone gall wasp creates galls affectionately called the Hershey’s Kiss gall, because of its shape, altho it is much smaller and bright red.  Look for this common gall on the leaves of the valley oaks.

They are much smaller than oak apples, but hard to miss because of their bright color.                                          These are only two of many types of galls found on oaks and other trees.  Each one has its own story.  Search the Internet for yourself to learn more about these fascinating organisms, and keep your eye out for growths on California native plants that might be galls of one type or another.     (Thanks to Joyce Gross of U.C. Berkeley for the use of this photo of Andricus kingii).